In comparison to the rest of this list they’re fairly harmless. Their main crimes were torturing each other, looking gross, and attempting to make a bird pie. They weren’t the brightest given they managed to get themselves glued head first to the floor, and lost the battle between man versus bird; but you have to admire their elaborate prank ideas – the funny stick is pure genius and would take commitment.

This was my second favourite Roald Dahl book growing up, mainly for the bit where Mr Twit ties Mrs Twit to some balloons to get rid of her.

In fairness, even though they do look gross, they’re just trying to protect their farms.

In fairness kids can be annoying sometimes

The BFG was my favourite; and as an adult I like the idea that my weird dreams are simply the result of a giant outside the window with a trumpet (as opposed to reflecting a very odd sub-conscious). Anyway, the evil giants ate humans every night and bullied the BFG for being nice. I didn’t put them higher up on the evil scale though cause they’re all living in a pit now, forced to eat snozzcumber – they’ve suffered for their crimes.

Mr and Mrs Wormwood are horrible people and neglectful parents who don’t even like their daughter. Mr Wormwood runs a crooked car dealership – and as a bookworm, Mrs Wormwood’s line “you chose books, I chose looks” cuts me to the core . The only ‘nice’ thing they did for Matilda was let Miss Honey adopt her, and its pretty cold that they weren’t phased by giving her away.

When I first read this book as a child it scared me so much. Dead-set, for a while I was on the lookout for the signals (wearing gloves? I’m on to you!!!). The Grand High Witch, and Witches in general, go out in disguise and steal and kill children. And their motive is just that kids piss them off. I mean at least the Enormous Crocodile didn’t try and disguise himself, he was all ‘what you get is what you see’.

Poor James has to live with these two for three years before they’re thankfully left ‘as flat & thin & lifeless as a couple of paper dolls’ after a peach accident. They’ve made second place because James isn’t allowed off the hill to talk to anyone else, they abuse him and they threaten to lock him in the cellar for a week.

Even as a child, I remember first reading Matilda and thinking, I don’t think that’s legal, have they tried calling child welfare?

How did Mrs Trunchbull get a job in teaching in the first place? She has such a raw hatred for children, I would’ve loved to see her try and bluff her way through that job interview. Or was she originally really nice then teaching broke her spirit?

Her list of evil doings throughout Matilda include: grabbing children by the hair, and swinging a little girl by her pigtails because she hates pigtails, force-feeding Bruce Bogtrotter cake in front of an assembly, throwing children out the window for eating in class, locking children in a narrow cupboard called ‘the chokey’, most likely killing Miss Honey’s Dad, was a terrible guardian to Miss Honey after her parents died and stole all Miss Honey’s inheritance. 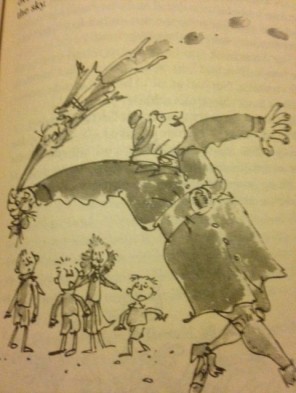 (say what you will about Agatha though, but its nice in this picture to see a teacher feeling enriched by their job) 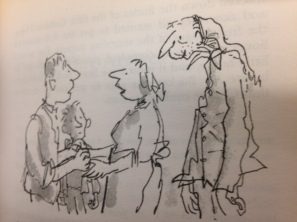 They’re good parents and all, who are trying their best even though they don’t have a lot. But am I the only one who questioned their choice of guardian for this day long trip to the chocolate factory? Grandpa Joe  has been bedridden for years, and he’s not even taking a cane on this trip which will involve a lot of walking.

Mrs Gloop has a very poor understanding of nutrition, seen in this quote ‘Its all vitamins anyway’.

I can’t get too judgy, I binge watch a lot of shows. Mike is an obnoxious shit though, and it probably wasn’t the best idea to just stand around while he shrunk himself.

I’m sure spoiling Veruca came from a place of love but it has gotten a bit out of hand, nobody needs that many pets. And Veruca is a shit name to give your child.

I don’t have kids so I don’t want to get too preachy here, but if your child has been chewing on the same bit of gum for three months straight, you should really encourage them to throw out that bit of gum. Also Mr & Mrs Beauregarde heard Mr Wonka repeatedly say the his gum wasn’t ready before Violet tried it.